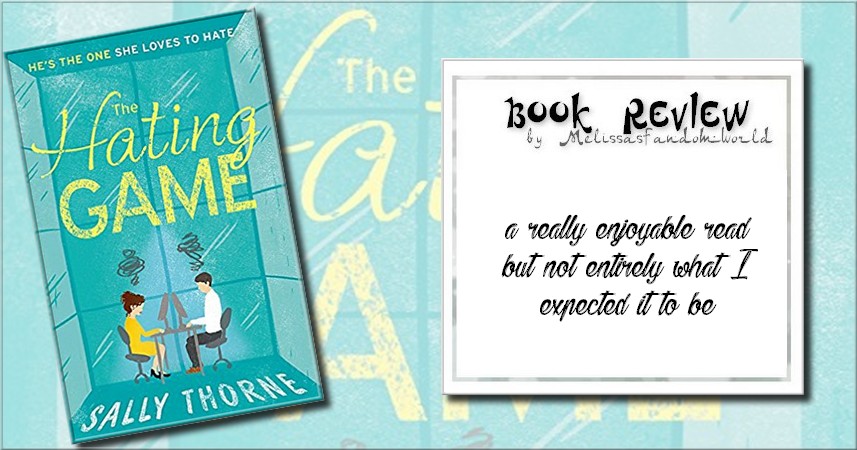 Nemesis (n.)
1) An opponent or rival whom a person cannot best or overcome;
2) A person’s undoing;
3) Joshua Templeman.

Lucy Hutton and Joshua Templeman hate each other. Not dislike. Not begrudgingly tolerate. Hate. And they have no problem displaying their feelings through a series of ritualistic passive-aggressive maneuvers as they sit across from each other, executive assistants to co-CEOs of a publishing company. Lucy can’t understand Joshua’s joyless, uptight, meticulous approach to his job. Joshua is clearly baffled by Lucy’s overly bright clothes, quirkiness, and Pollyanna attitude.

Now up for the same promotion, their battle of wills has come to a head and Lucy refuses to back down when their latest game could cost her her dream job…But the tension between Lucy and Joshua has also reached its boiling point, and Lucy is discovering that maybe she doesn’t hate Joshua. And maybe, he doesn’t hate her either. Or maybe this is just another game. 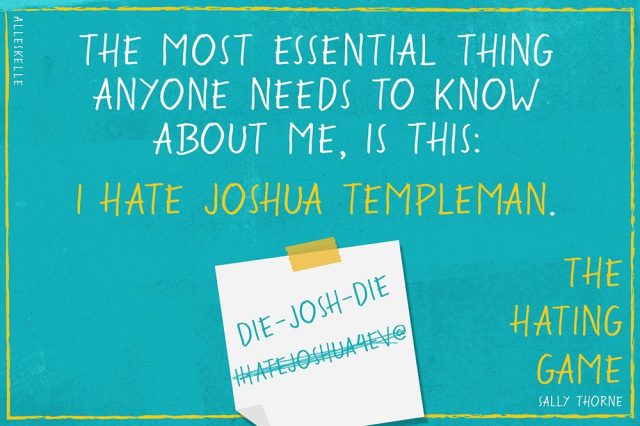 Hating someone feels disturbingly similar to being in love with them. I’ve had a lot of time to compare love and hate, and these are my observations.
Love and hate are visceral. Your stomach twists at the thought of that person. The heart in your chest beats heavy and bright, nearly visible through your flesh and clothes. Your appetite and sleep are shredded. Every interaction spikes your blood with adrenaline, and you’re in the brink of fight or flight. Your body is barely under your control. You’re consumed, and it scares you.

I thought this was a really fun read, but not majorly spectacular or anything. Most parts of the book were really fast-paced and addictive. But to be honest, there have been some moments in the book as well, when I didn’t felt too engrossed by it and in which my reading pace was set back a bit at times.

I liked reading Lucy’s pov because her thoughts were interesting and fun to read. But I also would’ve preferred it, if there’d been a Josh POV as well. You can guess as to what he’s feeling and thinking but especially in the first part of the book I think it would’ve added more depth to the book in general, if we could’ve read it from his pov as well – he’s just so INTERESTING and I craved more more moreeee of him every single second I spent reading this book.

But overall, I really liked our female lead, Lucy. She feels like a realistic character. She’s (head)strong and likable but has her flaws as well. Same goes for Josh. He’s LOVEABLE but has some flaws of his own which make him feel realistic as well and I love coming across characters like these.

The romance itself is incredibly sweet and adorable. It has enough depth and is overall well developed I think- although I personally would’ve liked to see some progression being made more early on in the story as well. At times, it felt like; 1 step forward and 2 steps back and it could be frustrating since I was so worked up to finally get to the point in the story when they open up to one another hihi – yeah, I don’t have much patience, lol.

“Put me down. This isn’t funny.” My feet make little ineffectual spirals. This isn’t the first time a big kid’s thrown his weight around with me. Marcus DuShay in third grade once slung me onto the hood of the principal’s car and ran off laughing. The plight of the little humans. There is no dignity for us in this oversize world.

“What on earth for?” I try to slide down but he spans his hands on my waist and presses me against the wall. I squeeze his shoulders until I come to the informed conclusion that his body is extravagant muscle under these Clark Kent shirts.

“Holy shit.” His collarbone is like a crowbar under my palms. I say the only idiotic thing I can think of. “Muscles. Bones.”

So there are a lot of contradictive feelings I feel regarding this book. Despite my remarks, I feel like overall it’s a really enjoyable haters-to-lovers romance that can be quite addictive from time to time and one I’d recommend you give a try if you’re looking for a new romance read. And Fun Fact for the ones who didn’t know this yet; It’s going to be made into a movie. I’m really curious about the movie because I think this book is the perfect source material to create a funny rom-com movie with and I’m already looking forward to seeing it when the time comes we’ll be able to go see it.

18 thoughts on “[BOOK REVIEW] The Hating Game by Sally Thorne”