In order to clean out my Want To Read list on Goodreads, I decided to give this a try by writing the Down the TBR Hole article. This article was originally created by Lost in a Story and a lot of other bloggers are publishing it as well so you might’ve already come across it here and there. I always like reading those Down the TBR Hole articles and hopefully you’ll like to read it over here on my blog as well.

◊ Go to your goodreads to-read shelf.
◊ Order on ascending date added.
◊ Take the first 5 (or 10 (or even more!) if you’re feeling adventurous) books. Of course, if you do this weekly, you start where you left off the last time.
◊ Read the synopses of the books
◊ Decide: keep it or should it go?

It’s really fun to see which books I’ve added to my to-read list so long ago and to find out how I feel about them now, all those years later. Since I’ve only been using Goodreads actively since 2014, there aren’t any books I’ve added prior to 2014 obviously. In the first Down the TBR Hole edition, I showed the first 6 books I’ve added to my Want to Read list on Goodreads back in 2014. Today I’m at #3 of Down the TBR. In the prior 2 editions I managed to get rid of 4 books in total. Today I have 6 new books to show you. Let’s see if and which ones I’m going to delete haha. Here we go!

Before the Evolution there was TorBane: technology that infused human DNA with cybernetic matter. It had the ability to grow new organs and limbs, to heal the world. Until it evolved out of control and spread like the common cold. The machine took over, the soul vanished, and the Bane were born. The Bane won’t stop until every last person has been infected. With less than two percent of the human population left, mankind is on the brink of extinction.

Eve knows the stories of the Evolution, the time before she wandered into the colony of Eden, unable to recall anything but her name. But she doesn’t need memories to know this world is her reality. This is a world that is quickly losing its humanity, one Bane at a time.

Fighting to keep one of the last remaining human colonies alive, Eve finds herself torn between her dedication to the colony, and the discovery of love. There is Avian and West – one a soldier, one a keeper of secrets. And in the end, Eve will make a choice that will change the future of mankind.

The Bane is The Terminator meets The Walking Dead with a heart-twisting romance.

Previously published as Eden, due to reader demand it has been revamped and rereleased as The Bane: book one in The Eden Trilogy.

Ahh I can’t believe that I completely forgot about the existence of this book. Reading this synopsis has me so excited. I still very much want to read this book in the future so I really can’t see myself tossing this one haha. I mean; there’s a mention of the Terminator meets the Walking Dead? Who the hell isn’t interested in reading about that? hehehe..

Ever After Drake by Keary Taylor (the McCain Saga #1)
Genre: Contemporary Romance
Added to GR in: March 2015

It was my first day as a brand new high school teacher. But I got dumped that morning. Via text. And then one of my students hit on me. And the rest of the day was a complete mess. The beautifully single Mr. Drake McCain found me in my classroom, feeling sorry for myself. And not sixty seconds later he had me laughing and electricity racing through my blood.

My family is broken and complicated. I literally don’t know my biological father’s name. My mother is absent and my half-brother barely knows who she is. But Drake? He’s not complicated. He’s sweet and kind and insanely adorable, and comes from a wonderful family. He is everything I want.

I’m Kaylee Ray. I believe in fairy tales and happily ever after’s, and maybe the search for Prince Charming is over.

a Teacher-Student romance? YES please! This sounds so exciting. I haven’t read much of these kind of romances, Teacher-Student, and would really want to read more of them. This has drama and disaster written all over it and sometimes that’s exactly what I need in a steamy romance, so this one is definitely staying on my list!

a Dance with Darkness by Courtney Allison Moulton (Angelfire #0.5)
Genre: YA, paranormal
Added to GR in: April 2015

With scorching romance and fantastic action, this original novella is a prequel to Courtney Allison Moulton’s gripping and epic Angelfire series.

There were shadows in this alley that no light touched, and where there was no light, anything could hide.

At the end of the fourteenth century, angelic reapers struggle to defend London against a legion of the demonic who have their sights set on claiming human souls and ancient relics for a dark purpose. Madeleine, a young but powerful warrior, is duty-bound to fight the demonic, and she lives for this pursuit above all else. Then, on a routine night of tracking, she is ambushed by a cadre of reapers and, though she defeats them all, she is left wounded and at the mercy of their lord, the notorious Bastian.

Madeleine is astonished when Bastian lets her live. She goes deeper into the world of the demonic and is shocked to meet him again—this powerful reaper whose touch makes her restless and gives her a thrill unlike anything else. When they fall into a dangerous clandestine affair, her head and her heart must wage their war: can their love overcome his demonic nature? Will her dance with darkness burn her or bring Bastian into the light?

Well, I thoroughly enjoyed reading the Angelfire trilogy. I am planning on re-reading them in the future too, but I don’t see myself reading this prequel anytime soon so I guess I’m going to get rid of it for now. Maybe I’ll look it up again in the future? Who knows…

the Stars Never Rise by Rachel Vincent (the Stars never Rise #1)
Genre: YA, paranormal, demons
Added to GR in: April 2015

Sixteen-year-old Nina Kane should be worrying about her immortal soul, but she’s too busy trying to actually survive. Her town’s population has been decimated by soul-consuming demons, and souls are in short supply. Watching over her younger sister, Mellie, and scraping together food and money are all that matters. The two of them are a family. They gave up on their deadbeat mom a long time ago.

When Nina discovers that Mellie is keeping a secret that threatens their very existence, she’ll do anything to protect her. Because in New Temperance, sins are prosecuted as crimes by the brutal Church and its army of black-robed exorcists. And Mellie’s sin has put her in serious trouble.

To keep them both alive, Nina will need to trust Finn, a fugitive with deep green eyes who has already saved her life once and who might just be an exorcist. But what kind of exorcist wears a hoodie?

Wanted by the Church and hunted by dark forces, Nina knows she can’t survive on her own. She needs Finn and his group of rogue friends just as much as they need her.

I don’t know? I just don’t know what to do with this book? The synopsis still sounds good and I really want to read something written by this author at one point. But will I get around to buy and actually read this one in the nearby future? I don’t think so… So, for now, I’ll be deleting it from my want to read list since it won’t get priority anytime soon. 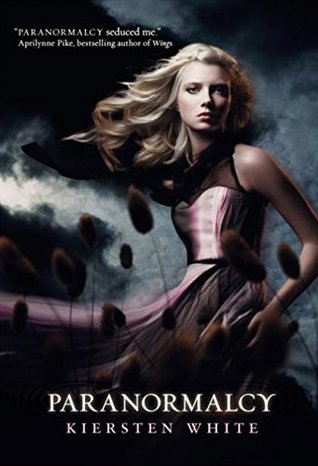 Evie’s always thought of herself as a normal teenager, even though she works for the International Paranormal Containment Agency, her ex-boyfriend is a faerie, she’s falling for a shape-shifter, and she’s the only person who can see through supernatural glamours.

She’s also about to find out that she may be at the center of a dark faerie prophecy promising destruction to all paranormal creatures.

So much for normal.

I’ve been wanting to read this author for years, but haven’t really gotten around to buy her books yet. The synopsis of this one sounds interesting I think with all the magical creatures in it like faeries, shape-shifters and other paranormal creatures. A dark faerie prophecy? This sounds so interesting! So, for now:

When you wake up in the morning and your eyes take in the first hints of light that shine through your window, the dust motes catching and reflecting the sun’s rays like little diamonds, the shimmering hues of yellow and orangey gold breaking through into your room, the first thing you think about usually isn’t how you’re going to make it through the worst day of your life.

Unfortunately for Grace Shelley, that’s exactly what she’s facing as she ponders what to do now that she’s going to be starting out her last year in high school without her best friend. She’s not exactly the most popular girl in school – well, not the most popular girl in school to like, anyway – and everything seems to be hinting at another status quo year for her until she bumps into a stranger who leaves her stumbling for words and chasing after her heart.

The new guy in school is different. Robert doesn’t care about the rumors he’s heard about her or that no one else seems to see her the same way that he does; he only wants to be her friend. That’s when things get complicated. When Grace learns that he’s not your typical high school boy and that he’s actually a wingless angel who’s looking for someone to trust, she’s thrust into his world where not all angels are meant to protect human beings, and where the changes she brings into his life changes everything in hers.

Somehow, even though it’s a really well written down synopsis, reading it doesn’t make me really excited about it anymore though? It has angels in it and God knows I love reading about those. But I don’t know… It doesn’t ‘click’ for me anymore, you know?

Out of these 6 books, 3 will GO and 3 will stay. So I think this third time writing my Down the TBR hole, went really great, don’t you think? But I’m ashamed to say that while I’ve been removing books from my tbr with the help of this article, I’ve also been adding books to the tbr as well. So in the end, I haven’t really been productive hahaha. But so far, I’ve deleted 7 books from my want to read list that I wasn’t really planning on reading anymore so that’s at least something I guess, lol.

Have you read any of the books on my list? If so, should I change anything about the choices I made, you think? Maybe I removed one you think I should put back on my tbr? Love to hear from you. Thanks for reading and have a nice day!